Tell us about your project

Web applications for business and science

IT geeks looking for mind-blowing projects

High security level. Hacking and fraud protection. Smart-contracts, cryptocurrency support. Charge and withdrawal in automated, half-automated modes and so on.

Ticket and tour sales on your website. We work directly with booking systems such as Amadeus or Galileo or with higher level API's like Booking, AirBNB.

More features for your projects

Extra but not least

Native code apps as well as adaptive websites. Backend for your service.

Proper caching, load balancing from scratch. We are ok with AWS and Google Cloud also.

CDN or your own streaming server. Encrypted stream protection. Wowza  and P2P streaming.

Cases - how we do things

Metatest is an employee testing intranet portal. It allows creating various tests from simple choice to “draw your answer.” There is a powerful reporting module for admins to create sophisticated graphical reports without programming.

«TagFly» is a virtual travel agency and booking aggregator with a complex blog system. We implemented a tour search through several API’s, connected payment gateways and created a versatile multi-blog platform on site.

Playmusics is an online music library. It is a mashup of VK.com social network and LastFM. It allows to search for, download and organize music into playlists. Search results are grouped by artists and include their biography and upcoming events.

The client appeared without a clear understanding of the future product. Instead, he stated goals he wanted to achieve. The company management was sure that employees should continuously take psychological tests. There were only some example tests and a desire to get graphical reports afterward.

There was a need in access roles and levels, for example, the heads of departments should have control over testing process deadlines of their subordinates. For example, “The whole department should take the psychological type test by the end of November.”

The system seemed to need several roles with tasks and privileges. We agreed on implementing Access Control List (ACL) pattern where users have roles and roles own resources. Thus it was easy to add new resources and roles during development of the project.

When we delivered MVP, the client decided to change the project audience. Instead of being used inside one company, it had to be a cloud product for many companies. Thanks to ACL pattern, it was easy enough to rearrange access levels and to add the “Cloud administrator” role.

By that time we had an extensive understanding of the project roles and goals.

Editors created tests and reports for users and administrators. Staff officers managed employees database, sent invitations and controlled the process of test taking. Summary reports were available after all of the staff members had finished the tests.

For notification purposes, we added a personal messaging system. Now the administration could send test invitations to single people or whole departments easily. We also sent a copy via e-mail. If that was the employee’s first invitation, we created a new account for him. 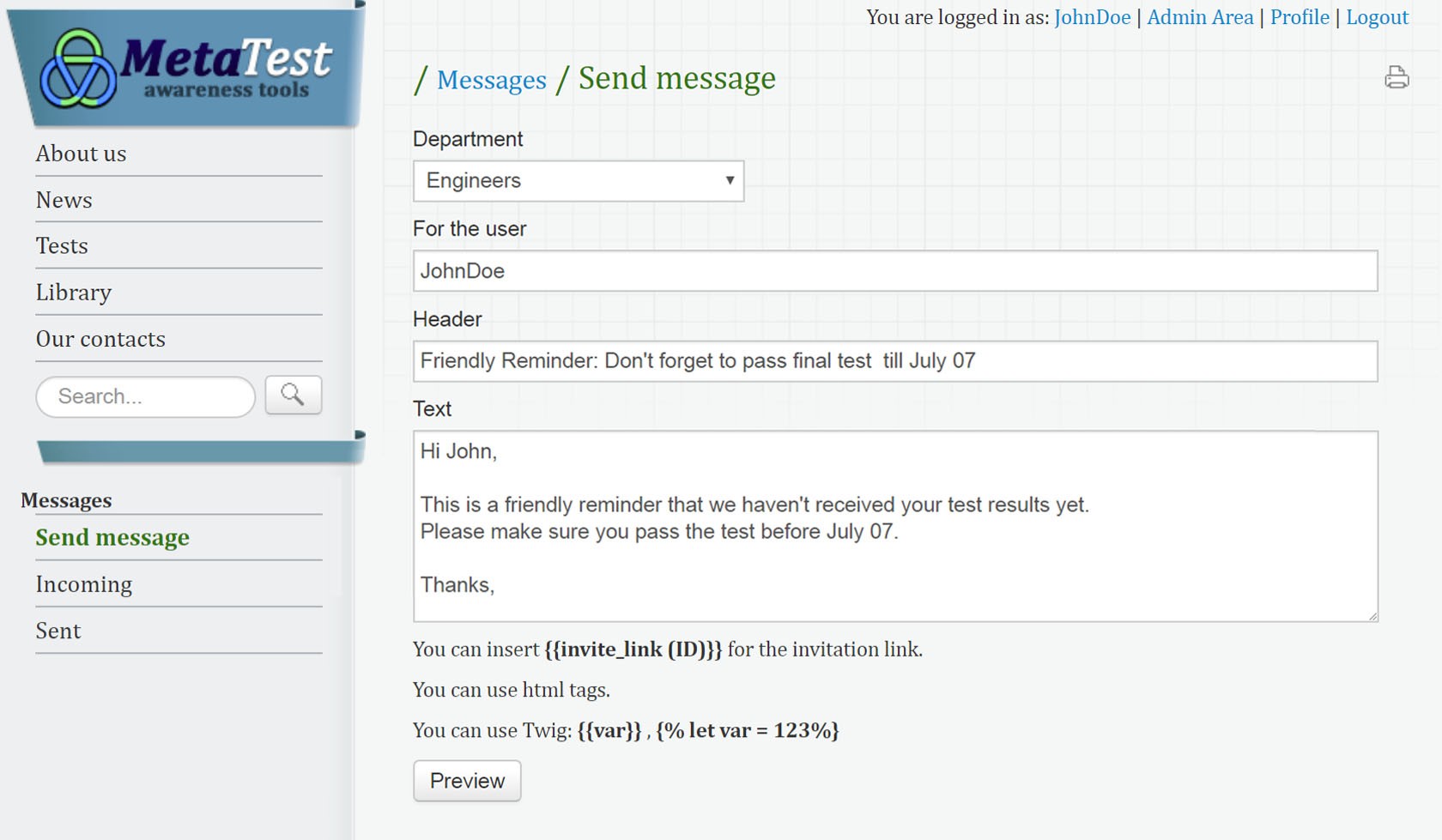 About reports. They had to be extremely flexible with different types of graphs and with the support of statistical math functions. For example, one can show personal motivation question answer only for people that scored 10 points more than average or filter people that are working in a company for more than a year. 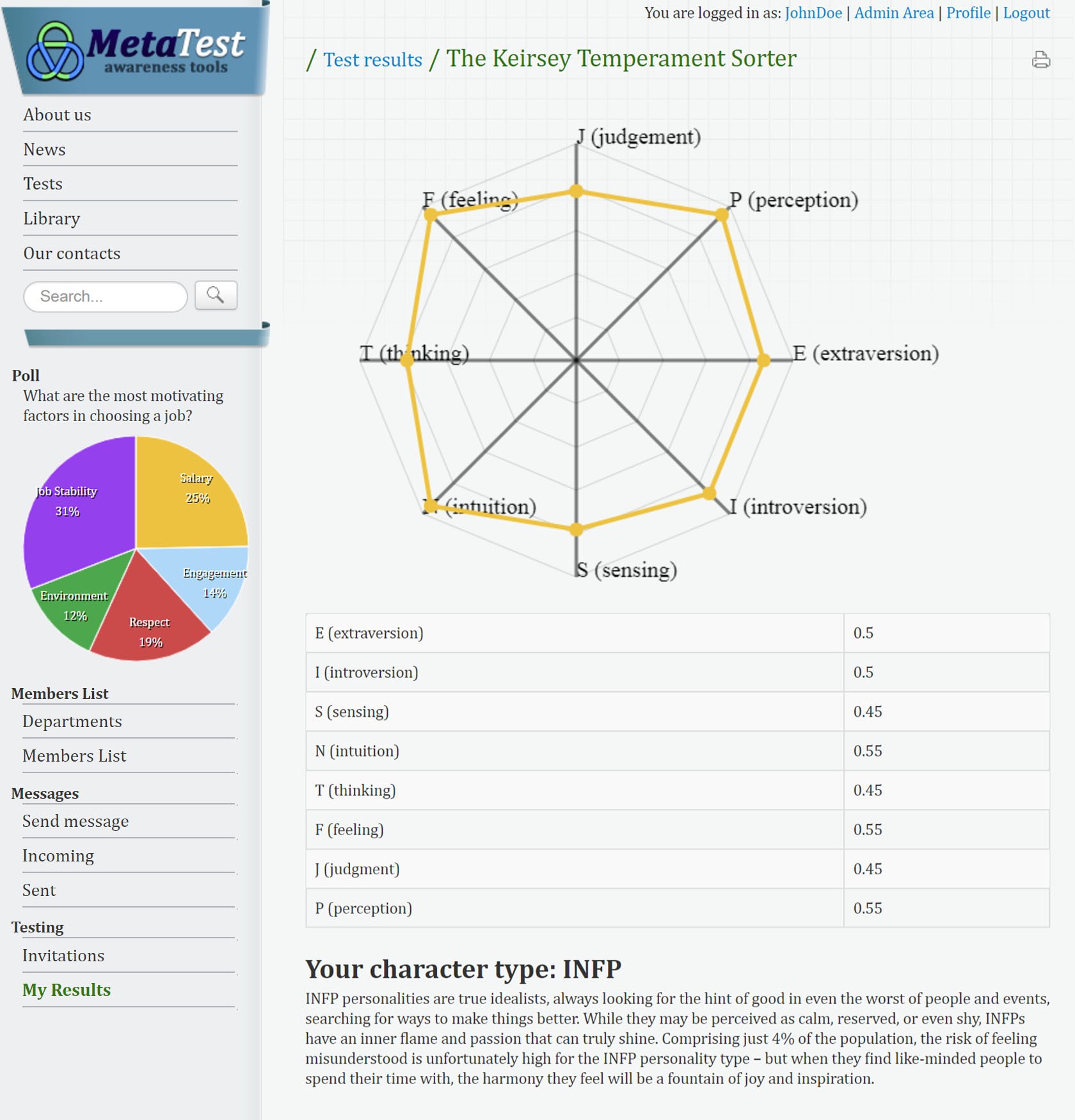 We could solve that by writing code for each specific report type. But we decided to write a unique report creation language, so-called DSL (Domain Specific Language). We used Twig templating engine as a base. Twig is a complete language with conditions, cycles and variables, but it is safe and is working in a sandbox environment. 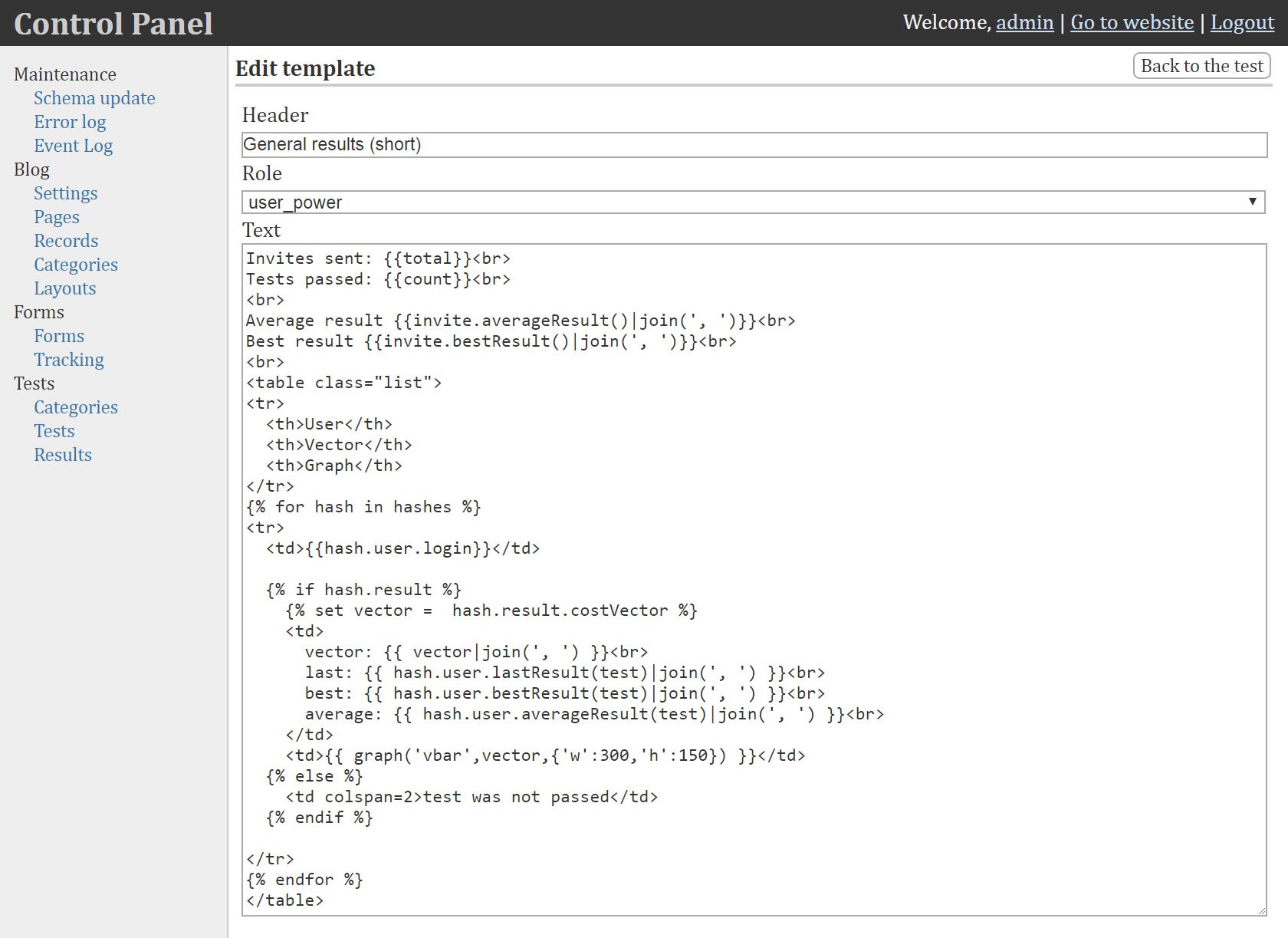 Then we created the logo and UI design, added some extra features like quizzes on the homepage and banner rotation functionality. As a result, we got a stable and user-friendly product. All thanks to nice initial requirement gathering and agile development process.

The customer wanted to create a tour booking aggregator with blogging functionality. He insisted on having flexible Pinterest newsfeed, tagging, categorization and search functionality in the blog area.

We created a special syntax to describe feed rules for categories. It was simple enough for users and quite feature rich to achieve customer goals. Here is an example of feed rules in the “France” category 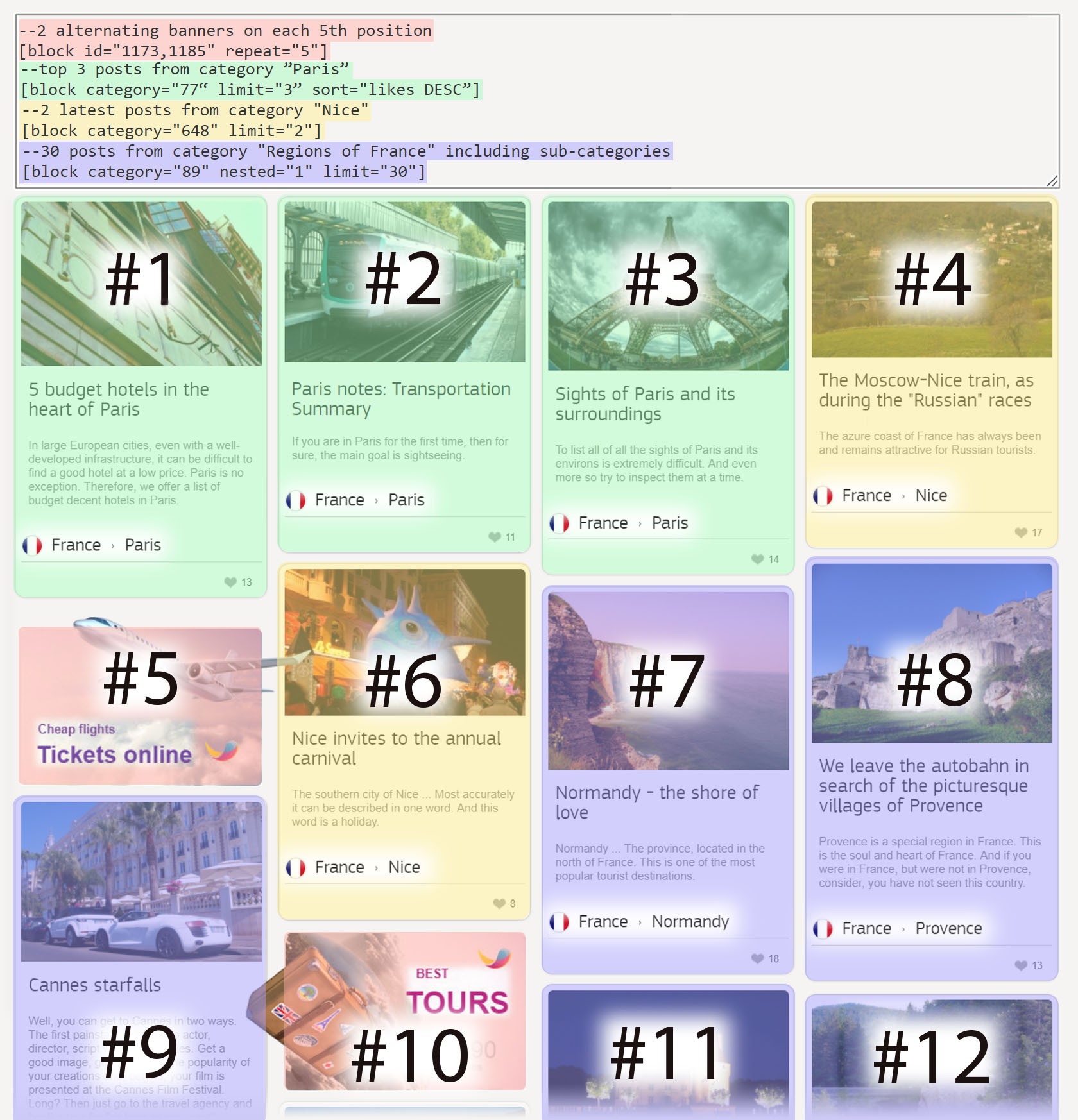 feed output rules and feed itself

The performance was critical in tour search. We minimized number of API requests and created flexible caching system. Site fulfills queries according to a broader search request and caches them. Then user filters search results for a specific region, hotel, comfort level; then information is updated in less than a second. 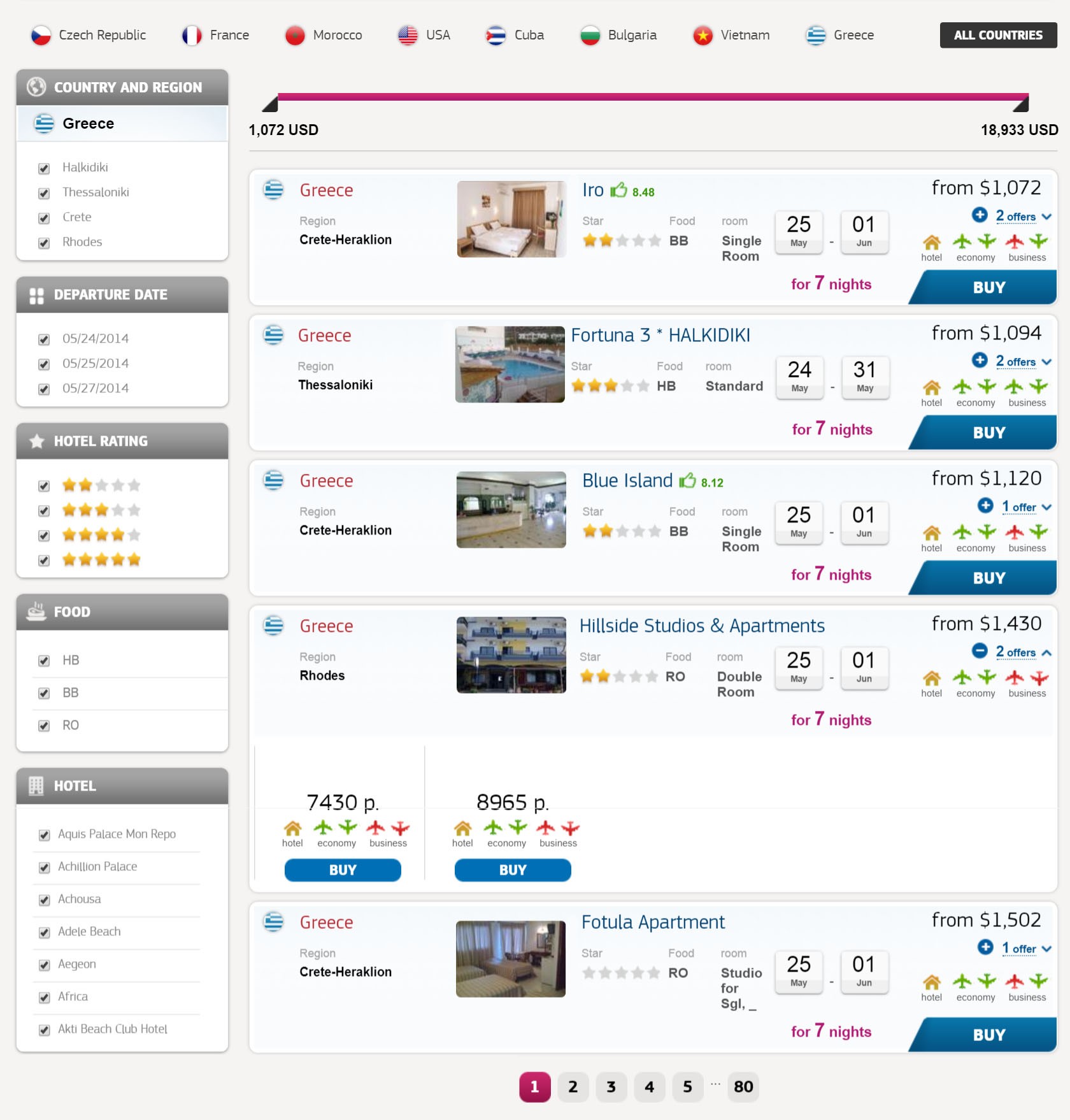 Unfortunately API was not suitable for such an approach. It limited the number of tours, which we could get in a single request. That’s why if you give a broad request to it, part of the results doesn’t come out.

After fixing many bugs in provider’s API, after tons of support emails and hours in skype, we managed to create an algorithm where we split the broad request into subrequests and set up the caching so everything worked well then.

A similar problem was with getting the final price from API. It was important since payment gateway was automated and there were no phone calls from managers between tour search and payment itself. Users from different countries should be charged differently for a visa, fuel surcharge and even for hotel and flight. API had no input parameters for such thing, so we created our own database to consider all this stuff. Thus we got full and accurate pricing precise enough to send the user a bill. 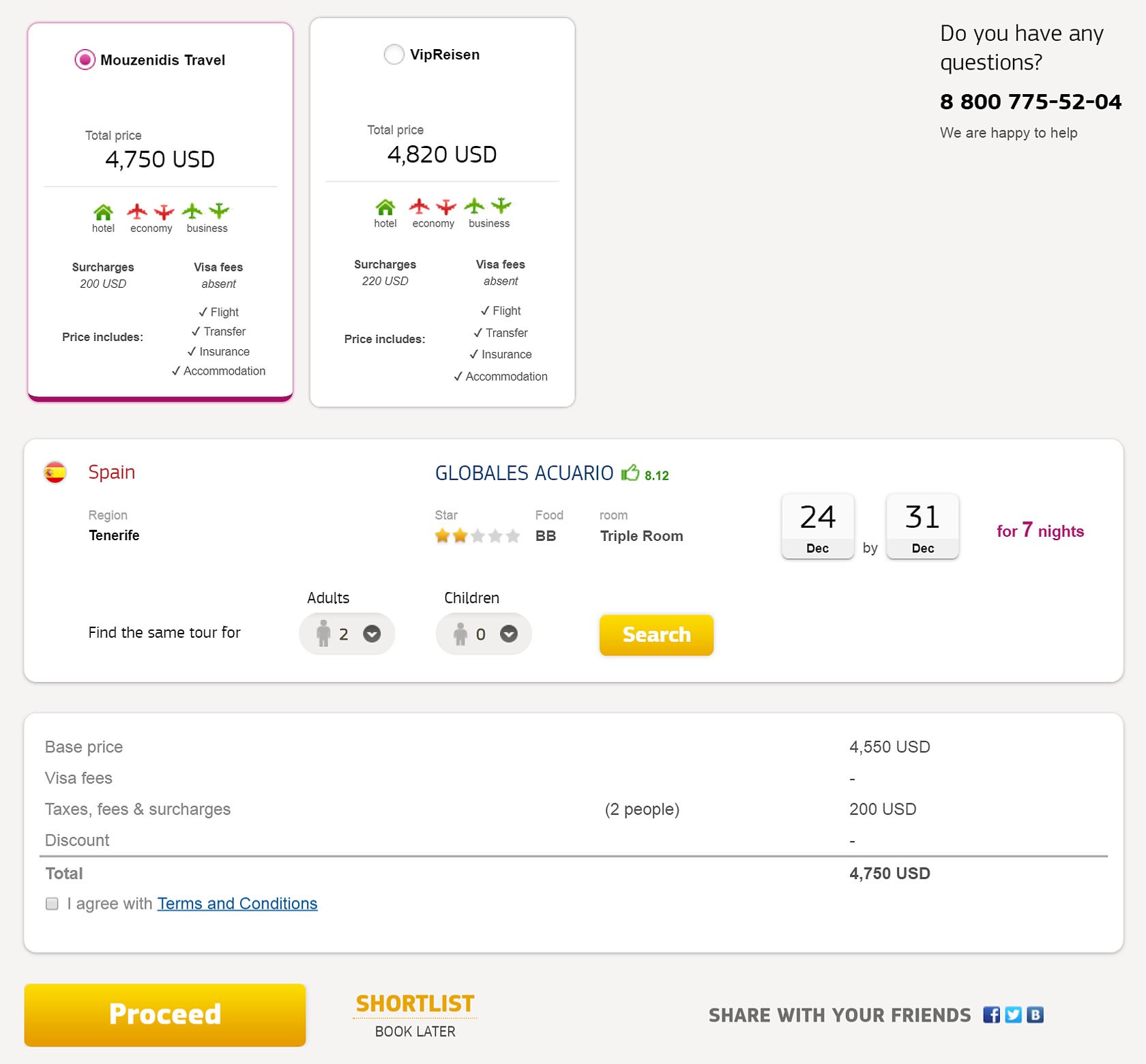 Everything else was a piece of cake. We connected payment gateways, did some UI design and tested everything. Then we created landing page editor for marketing purposes where landing pages are built from website content.

«TagFly» was an exciting project both for us because we solved challenging engineering tasks, and for the users, because they can travel more easily now. 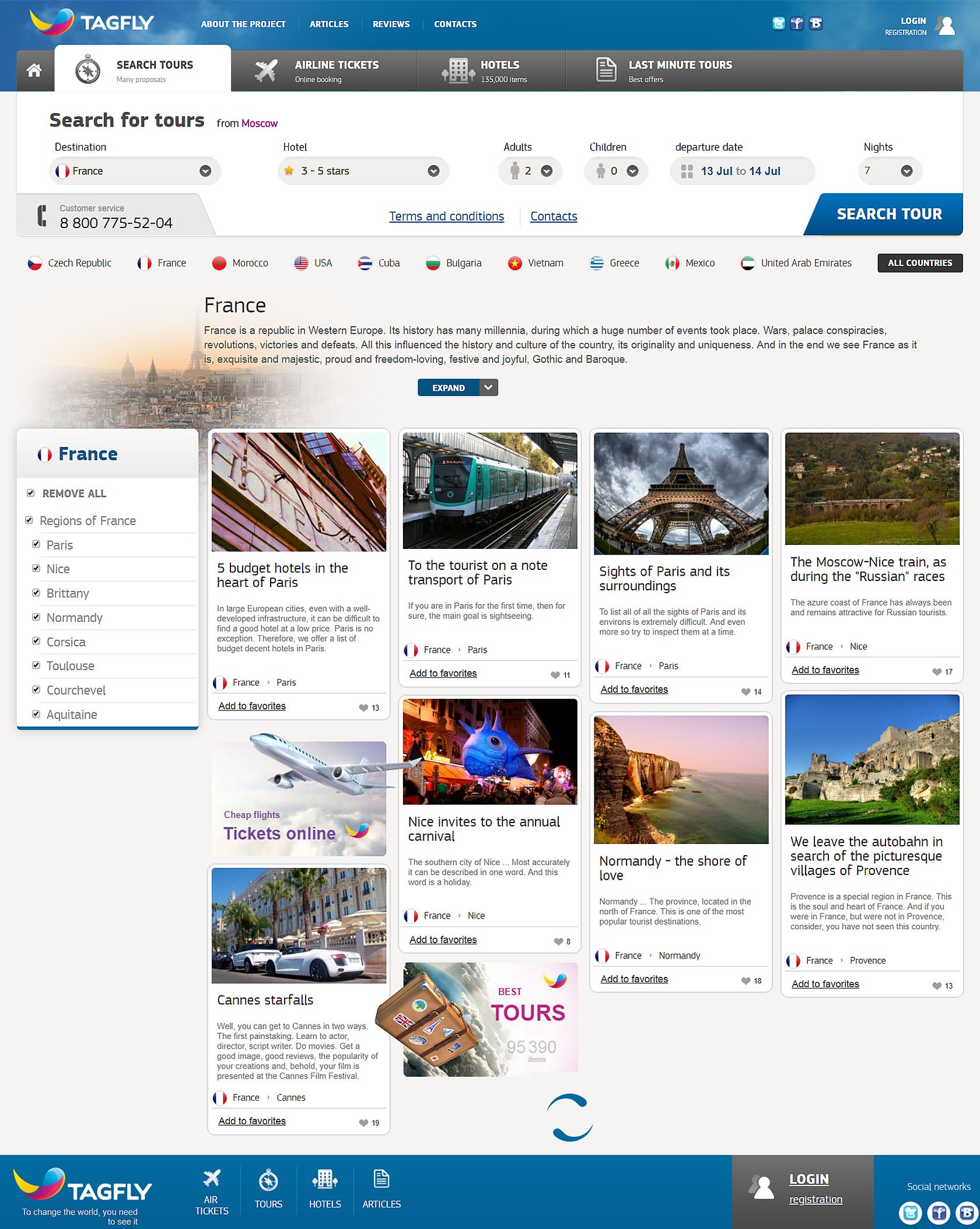 The customer wanted to create an online musical library - a mashup of VK.com social network and LastFM. The most obvious way to organize search was to create a semantic database of artists, albums, tracks and connections between them. Querying that DB allowed us to find the right track and to search for an mp3 file in VK later. To keep semantical data fresh we had to configure replication between our server and MusicBrains service or a similar one. That was the right way, but after estimating semantical DB size (around 100Gb) and replication problems, we came to a simpler solution.

Quality of VK search API is questionable, and VK database is not semantical. It's just a list of tracks uploaded by users. There were lots of duplicates and misprints. But we decided to take this "dirty" output and to filter it through LastFM API. Also, we removed duplicates, fixed typos with our algorithm. If we could not find track author in LastFM, we listed the track under "Other" category. Thus we got the almost semantic grouping without having our own semantic database. To minimize the number of requests and to improve performance we implemented several cache levels: for popular requests and artist data.

About UI design. The whole website is a music player. Current playlist, search results, user playlists are all shown in one manner to make UI clean and intuitive. 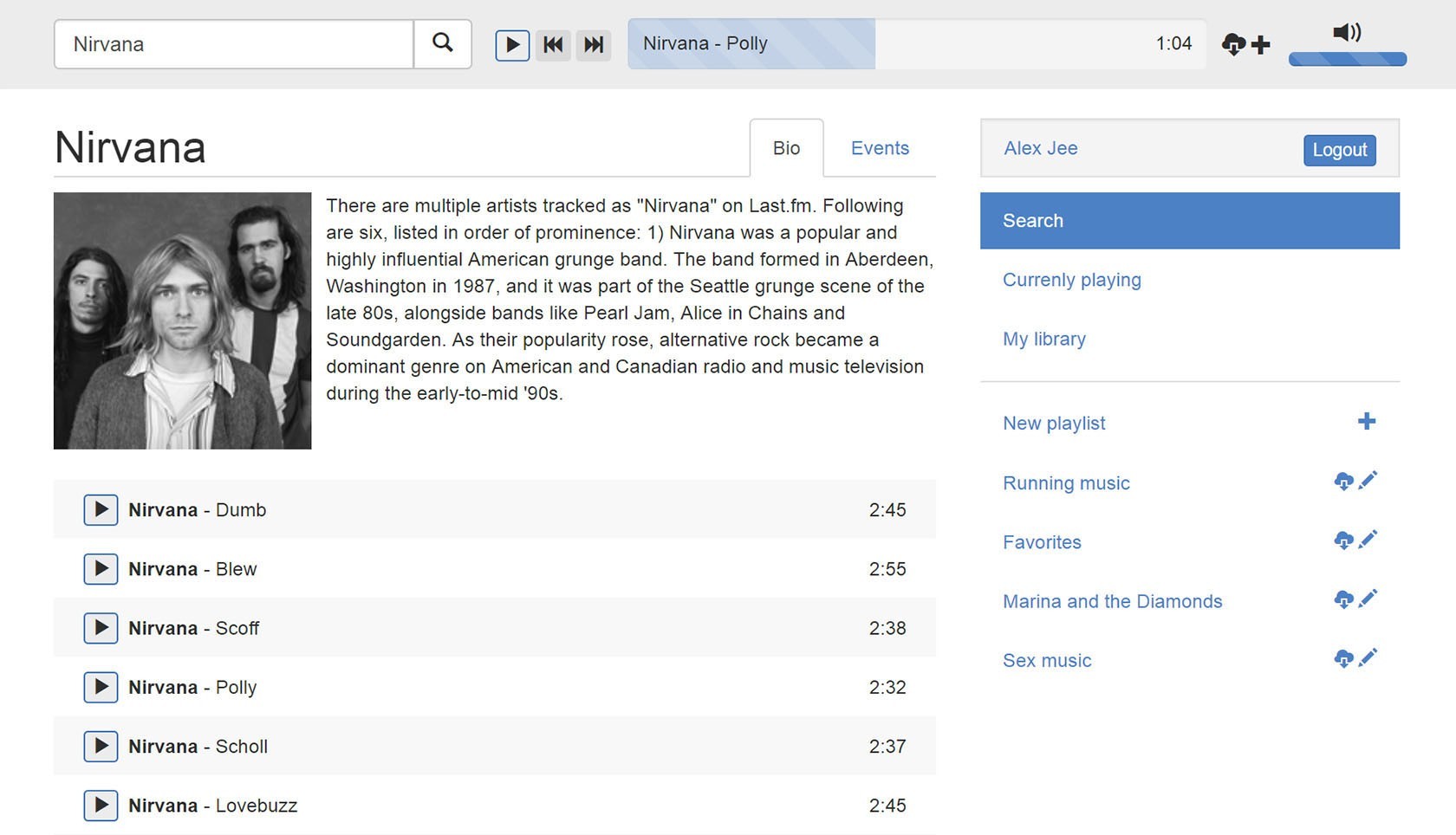 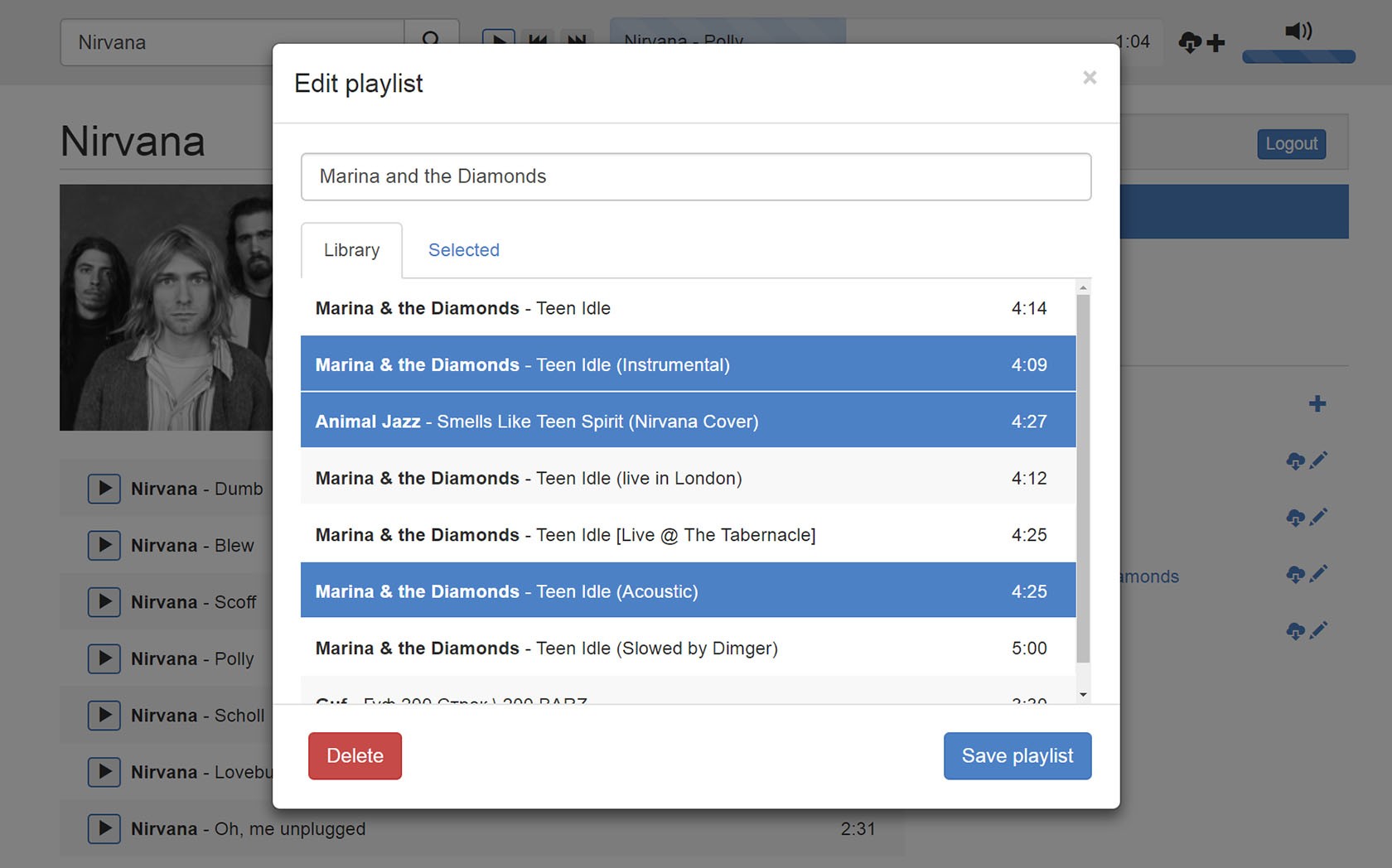 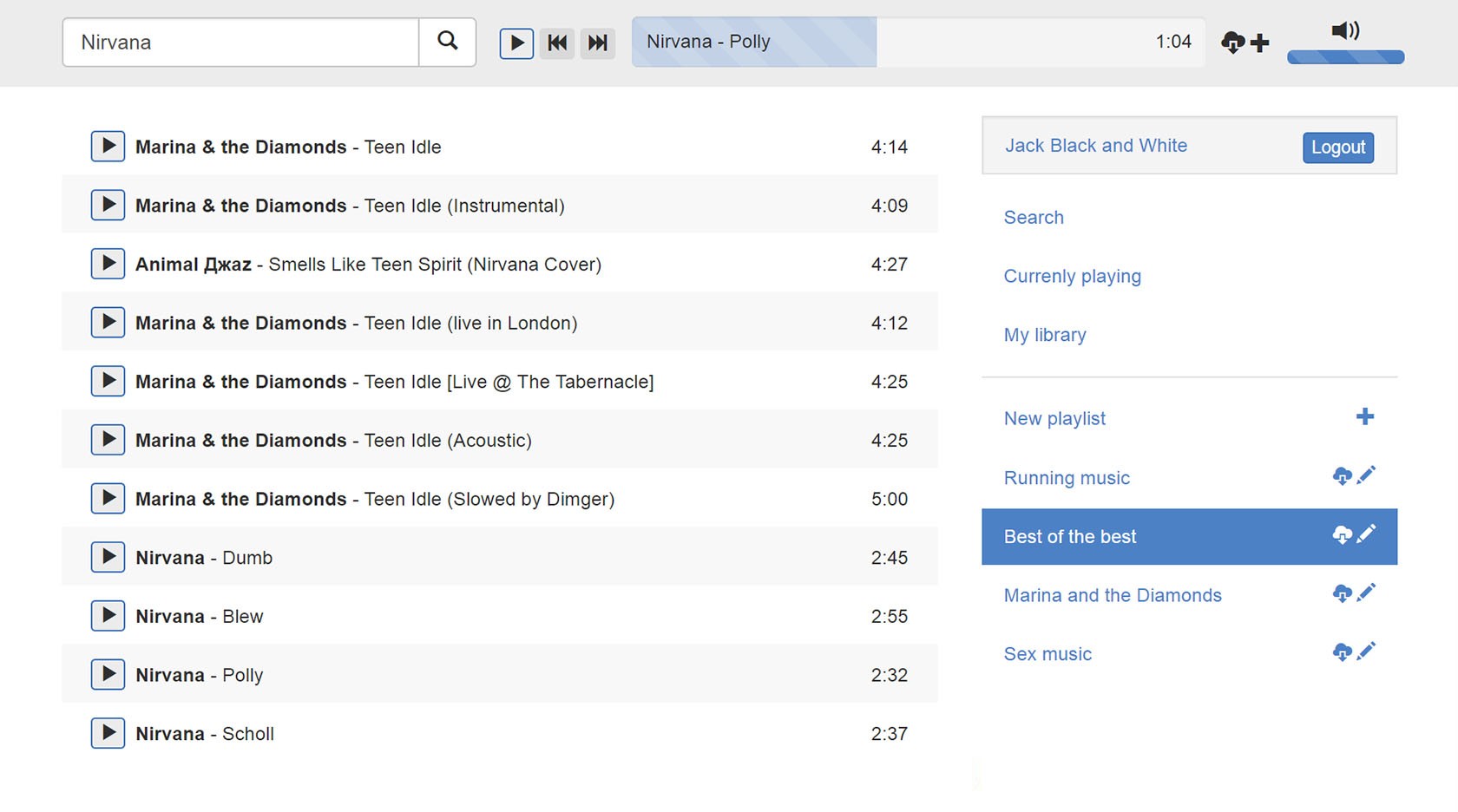 We created MVP and deployed the website. Traffic increased, and we found out that VK API wasn't a good fit. It had undocumented flaws and limits that were much lower than announced. Modular architecture that we always used was a great helper; it allowed us to rewrite the search module without touching the rest of the code. We replaced API with HTML parsing of search page in VK. Thus we preserved the whole initial schema, making service completely functional.

So we managed to create a service built on top of public APIs with caching to improve performance. It was crucial to write several prototypes to choose the optimal solution. Modular architecture approach helped us a lot, and when the external server went down, we had rewritten faulty module only.

Technology stack we use

On top of base math and algorithmic skills

Tell us about your project

Ronin
We search and assign full-time developer for your project exclusively. We provide productivity reports for his tickets.

We provide you a developer from inner BeeJee team. Project and product management, regular code-reviews and team-lead assistance included.

Not just a team, but a company

We speak English, Russian and German.
We keep the code clean, commented, covered with tests.

Nearly 100 implemented projects over last 5 years.
We are fans of solving non-standard and complex tasks.
This page is made in a landing page editor
We made that editor and IDE it was written in too.
We do software for making software. Tell us if you want to know more.
Ninja's code
Dao and dzen of software developers
Resourceful mind is my fortune

Call of duty is my armour

Contacts are sent per request

I needed help with rapidly wireframing and prototyping. BeeJee was super quick to grasp the requirements and develop elements that brought the app to life quickly. While I have had to postpone my project for entirely different reasons, Alek was great at getting his work done and I really appreciated that.

BeeJee are great to work with. Alek has excellent communication skills and quickly grasps project requirements both from a business side and from the technical side. Quality work was delivered on time and was nearly defect free when delivered. I can highly recommend him to anyone.
David Smith

BeeJee were able to solve these complex node.js and angular.js programming issues to our existing project with great communication throughout the project and attention to detail.
Great work & service. Thank you! Would definitely come back for more requirements.

BeeJee were very helpful with our React Native project. We needed someone that help us correct issues and figure out solutions and he has been very helpful in that matter.

Exceptionally talented senior developers. Alek went extra-mile to ensure the client is happy with the services rendered. We would definitely work together in the near future.
Ade Adekunle